No Thanks
Favorites for Spring

Like skiers hitting a great powder day, it’s a treat for runners to hit cherry blossom-lined paths at the peak of their bloom. While Japan might be the ‘cherry blossom capital’, (Sakura Season) several other cities are cherry blossom ‘destinations’, among them Beijing, Washington, D.C., Vancouver, B.C., and Auckland. And, surprise — the largest collection of cherry trees in the United States is in Branch Brook Park in Newark!

We’ve scoured the globe to come up with some of the best cherry blossom running spots. Before getting to the list, two items to point out:  Since each season is different,  predicting peak cherry blossom dates is like trying to forecast peak fall foliage. Generally speaking, peak time is late March to early April (November in the southern Hemisphere). Also, at peak bloom, these spots tend to be very popular, so we recommend going early to beat the crowds. To find all our routes tagged as ‘cherry blossoms’, click on the “Blossom” category on the GR home page.

Cherry trees are thought to be native to the Himalayas. They are revered and beautifully cared for in Japan. Here are some of our favorite ‘cherry blossom’ (sakura) routes in the Japan locations covered by Great Runs.

Tokyo.  Some of the most popular running routes in Tokyo incorporate lovely, cherry tree lined paths. Top spots include the Imperial Palace and Akasaka Palace loops, the 5k route through 2,000 cherry trees in Koganei Park, and cherry tree-lined path of the Meguro River.

Kyoto.  Kyoto is a special city for cherry blossom lovers. The most popular spot for running is the Kamo River paths, which have gorgeous cherry blossoms in season.  Maruyama-koen Park is known as Kyoto’s capital of cherry blossoms– in fact its star attraction is a weeping cherry tree which becomes lit up at night.

Nagoya. Many wonderful spots: Tsuruma Park and the paths lining the Shonai and Yada rivers. In the hills above the city, we love Heiwa Park.

Hiroshima:  Hijiyama Park is a favorite spot. There are also lovely blossoms along the several river paths we’ve mapped in Hiroshima.

Kobe. In Ujigawa Park, there are blossom-lined paths along the Ujigawa River all the way to Okurayama Park. Good opportunities along he numerous riverside towpaths, especially the Toga River.

Nara. Cherry blossoms abound in the mountains in spring. Head to Nara Park or Mount Wakakusa.

Sapporo. The world’s snowiest city bursts with color in spring. The go-to run during cherry blossom season is Maruyama Park. Also some nice spots along the iconic Toyohira River Path.

Yeouido Hangang Park is a large, popular park on the river featuring scenic views. Yunjunro Street, behind the National Assembly Building, is famous for its cherry blossom trees, which line up for nearly 6km! Seoul Forest Park is also a terrific cherry blossom spot. 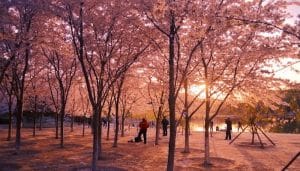 Cherry Garden in Yuyuantan Park (Jade Lake Park) is home to 3,000 cherry trees. famous for its cherry blossoms. Enjoy a 4-mile run through this park, which also features metasequoias, bamboo, and Liuchun Garden.

In a city known for its spectacular gardens, there are probably more cherry blossom locations than any other city in North America. Best spots for a run to see the blossoms are Stanley Park, Queen Elizabeth Park., and around the UBC campus. The city hosts an annual cherry blossom festival, which includes a fantastic website with a map showing 2,689 locations of ornamental cherries and 50 different cultivars of flowering cherry trees.

The best route is the ‘Memorial Run’, starting at the Washington Monument and heading out to the Tidal Basin, where cherry trees line the area near the Jefferson Memorial. Extend the Tidal Basin run into Potomac Park for even more cherry blossoms.

Philadelphia has some lovely cherry blossoms in the spring. The best bet for runners is to catch them in our Fairmount Park. You’ll also catch them on our center city routes, along Kelly Drive, & more. Here’s a helpful article.

This Olmsted-designed Branch Brook Park has the largest collection of cherry blossom trees in the United States. It’s a true destination spot in season. Also great for running, with a 4.5 mile paved perimeter path.

This part of northwest Michigan is a cherry blossom pilgrimage spot. Best bet for runners is along M-37 on our Old Mission Peninsula route. Also, sections of the Tart Trail and the M-22.

Parque do Carmo is a haven for nature lovers, decorated with over 6,000, including a well-known cherry tree grove. There’s a festival in July!

After the gloom of winter, runners especially appreciate the blossoming cherry trees in The Meadows, as large public park near the University of Edinburgh. Combine with a run in famous Holyrood Park.

Perhaps an unlikely spot for cherry trees…but the Japanese-themed Park Kioto that’s part of our Peremoha Park route is lined with cherry trees.

Parque do Carmo is a haven for nature and animal lovers alike. Located in the eastern part of São Paulo (Zona Leste), the park features 1.5 million square meters, 390 of which are preserved green area and accessible to the public. Popular attractions include a Planetarium,  natural amphitheater, a cherry tree grove, and the Arthur Etzel Nursery. The park is decorated with over 6,000 trees and is home to over 135 animal sRunners can explore the multiple bike tracks and jogging paths. One can put together several km of running along the paths — it is about 5.5 km (3.5 miles) around the perimeter of the paths. The park is known for its cherry blossoms, and has an annual festival in the middle of July. Great for running, but crowded during this time!

Aucklanders refer to their parks as “domains,” which we love. We also love this popular loop through Auckland Domain, which includes a run down cherry tree-lined Lover’s Lane.

Seattle, Washington also has some great cherry blossom blooms in the spring! They can be seen throughout the City, but the most famous locations is on the UW campus. They host a 5k here called the cherry blossom run every year!

Thank you, Alex. I will add that!